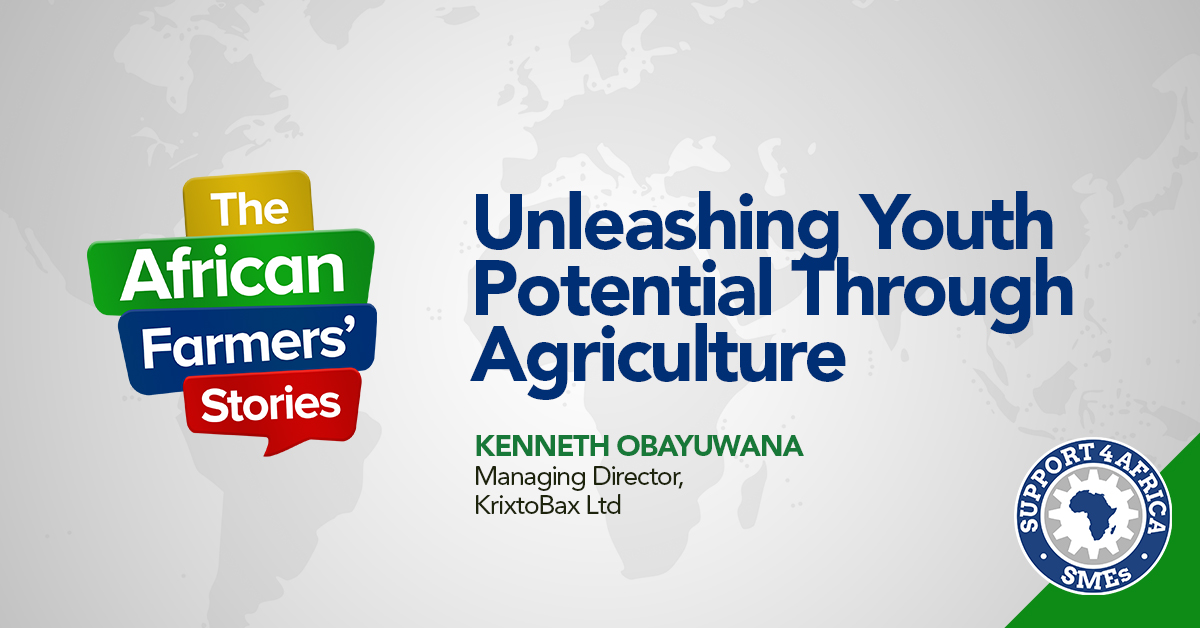 Kenneth is the Managing Director of KrixtoBax Ltd, an agro processing company that produces smoked catfish and fufu flour. He is also the executive director of Impact Africa, a non-governmental ideal development and performance enhancement organisation, a member of the Board of Directors, EyesofAfrika TV, a member of the Boardroom Institute, and a TheirWorld ambassador.

He holds a degree in Agricultural Economics and Extension Services and an executive MBA in Leadership and Management, and has won awards for entrepreneurship and leadership, such as the Best Entrepreneur of the Year (Class of Elite 2019) and the Outstanding Leadership awards from Benson Idahosa University. Kenneth is a fellow of the African Young Leaders Fellowship Program, through which he has grown his network, has been connected with thought leaders from different countries, and has gained access to grants and awards.

Kenneth’s passion is to use agriculture to end hunger, create wealth and jobs, and to drive equitable economic growth to lift millions in Africa out of poverty. Growing up in Benin City, he always had the desire to make an impact in his generation, and this prompted him to start an NGO at age 17, Impact Africa, with the mission to raise youth who will stand to make a difference and produce positive results in all their endeavours, from the academic to the professional, and the vision to raise world changers for the future by employing deliberate strategies. Impact Africa has hosted several programmes on many campuses, including “Goal Setting Masterclasses”, and their major program tagged “The Future Today”.

His agro processing enterprise, KrixtoBax Ltd, began during Kenneth’s undergraduate days, when he realised that his school pond was freely available. It was established with start-up capital from his first business (a boutique business) and sustained with funding from his elder brother and from sourced grants. The business allowed him to realise his dream of venturing into agribusiness, free his parents from being financially responsible for him, and provides employment for nine people. He notes that the four years spent in the business have been extremely rewarding.

His other engagements include being on the Board of Directors of EyesofAfrika TV, an online platform that projects the positive image of Africa to a global audience. It showcases the continent’s entertainment, fashion, entrepreneurs and rich culture, and is located in Germany while running online via Facebook, Instagram, YouTube, Twitter and LinkedIn. He is a member of the Boardroom Institute, a platform that allows him fully understand the benefits of cooperate governance, and the importance of board members to every organisation.  He is also ambassador for TheirWorld, a global children’s charity committed to ending the global education crisis and unleashing the potential of the next generation. His work as an ambassador involves organising conferences to enlighten the younger generation about agriculture. This led to the 2020 “Africa Farmers Convention”, one of the largest agro conferences in Africa that gathered over 600 smallholder farmers to teach them how to build, scale and sustain their agribusinesses.

Speaking on the needs of youth in Africa, Kenneth notes that they desire happiness, fulfilment and money, and emphasizes that the opportunities from agriculture to meet these desires is enormous, from processing to storage, logistics, technology and production. African youth simply must constantly find ways to drive their passion in line with agriculture and look for areas in line with their passion and plug into them, because “strength lies where passion is”.

The African Farmers’ Stories series is brought to you by Support4AfricanSMEs. Tweet interviews by Edobong Akpabio of Agrocentre. Interview edited by Oluchi Buchi-Njere.