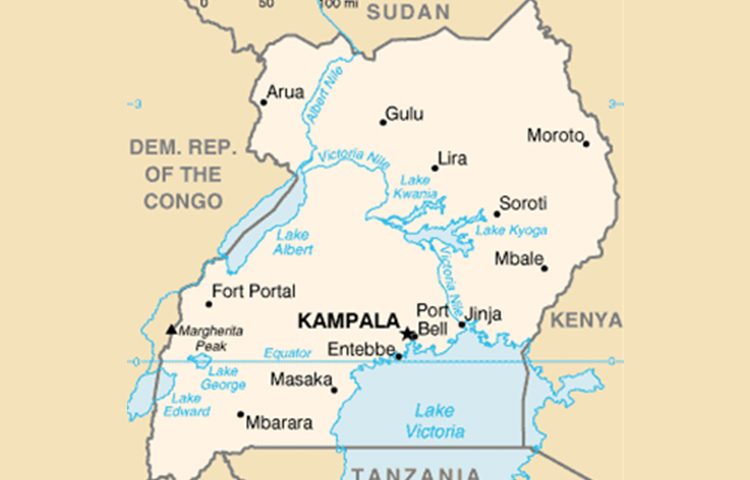 The global critical and commercial success of The Last King of Scotlandfocused attention on Uganda.  The Last King of Scotlandwas filmed in Uganda, a British drama based on Giles Foden’s novel of the same name.  It was adapted by screenwriters Peter Morgan and Jeremy Brock and directed by Kevin Macdonald.  The film was a co-production between companies from the United Kingdom and the United States, including Fox Searchlight Pictures and Film4.  The Last King of Scotlandtells the fictional story of Dr. Nicholas Garrigan (James McAnvoy), a young Scottish doctor who travels to Uganda and becomes the personal physician to the dictator Idi Amin (Forest Whitaker).  The movie is based on factual events of Amin’s rule.

The film was received well in Uganda, where it premiered two days before Whitaker won the Oscar for Best Actor.  Many Ugandans worked on the film, helping to train Whitaker to learn Swahili and to learn about the man he was portraying.  “For him, it wasn’t acting.  It was serving the character of Amin,” theatre consultant Daniel Ssettaba, who helped Whitaker train himself to speak and act like Amin.  Ssettaba and Whitaker spent weeks watching documentaries about Amin and visiting his birthplace and relatives in Uganda’s remote West Nile region, on the Sudan border.

The producers engaged local casting director, Joanitta Benulira-Wandera, for Ugandan actors in the film.  Besides being shot in Uganda, the film’s realism owes much to the Ugandan staff, who often pointed out discrepancies.  For Ugandan dramatists, Hollywood’s arrival is exciting.  “It will do a lot for actors in Uganda,” said Abby Mukiibi Nkaaga, who played a lead Ugandan role as Amin’s top henchman.

Making of The Last King of Scotland

Andrea Callender, Producer, Oscar winning The Last King of Scotland shared her experiences of shooting this feature film in Uganda. “From my own experience in Uganda on Last King of Scotland, there was a lot of willingness to facilitate filming there, from the top of the government through to theatre groups and individual location owners.   President Museveni authorised waiving VAT for our Ugandan filming costs, and said at the premiere of the film that he would offer the same facility to any other film which wanted to film there.  He also gave us access to any government building we required, and the use of the army for extras and general support.   His ministers and officials were all very supportive, particularly John Nagenda, his special media advisor.

What Uganda lacks is infrastructure, and we had to bring all our equipment in from Europe, South Africa or Kenya.   We did have about 100 Ugandan and Kenyan crew, with about 50 Europeans in Heads of Department and senior roles.  The Ugandan crew tended to have backgrounds in radio or theatre, but some of them used the experience they gained on the film to go on and work on other films in Kenya and South Africa.

There is a movement to make more “Nollywood” style films in Uganda among the younger generation, but I don’t know how successful that has been.  Most theatre and video productions tended to be the health aid agency funded variety, so most people had worked on dramas about aids, sex education etc.    People were very keen to access any kind of training and experience they could, and were very committed to the production.  There is a strong appetite to build up a film and video sector in Uganda, and certainly when we were there, an increasingly entrepreneurial culture, although starting from a very limited base”.

Images of love gone sour, political intrigue, war and torture are some of the themes that run in some of Uganda’s films, known as King Uganda, the popular name for Ugandan produced films. Ugandan films have good storylines which are relevant to the local audiences but they lack distribution and infrastructure. But despite this,  local filmmakers like Ashraf Simwogerere, who wrote and produced ‘Murder in the City’ and Mariam Ndagire, a scriptwriter and artist  released the film ‘Down This Road I Walk’, believe the film industry in Uganda has a great potential because of the high demand for local content. They believe that “Kina Uganda” can outmatch the Nigerian films if the production is tightened. Nigeria movies are currently the most popular films cutting across the Ugandan audience. While Uganda’s film-makers may only have limited production skills and equipment they are determined to grow the industry until it can compete with Nigeria’s Nollywood and other more established film industries in Africa.

There are no professional film schools in the country and while people can see the opportunity, they lack training in the basics of movie making. “We have so many people coming to us with some recordings they call movies,” says Hussain Kagolo, the president of Uganda Federation of Movie Industry (UFMI). “It’s painful because many of them lose money since no one would buy their films but as you know, shooting a movie is a very costly venture and when these poor films are put on the market, they end up discouraging the market as film fans out there start dismissing the rest of Ugandan films as rubbish.”

It is upon that background that the federation devised a training programme at their provisional film institute. This programme passed out some 82 students. “If Ugandan filmmakers want to reap big monies from their movies,” Kayondo told the enthusiastic group “Observe quality, be creative and original in all your works.”  “What makes a good film is a combination of very many talents, which also translates into jobs for people who are specialists in those areas.” As part of their training the students produced Nantaburirirwa a local film telling a local story. The students who received their certificates from the institute were trained in script writing, camera work, directing, acting and producing films. Many of the students were however receiving their first education certificates.

There is hope that this makeshift film courses can become the norm, thereby breeding a new life for the fast growing film industry which would become an agent of selling Ugandan culture and tourism, on top of providing numerous jobs to many a Ugandan. The institute plans to connect the students to different film making companies and groups such that they can expose their talent as well as earn a living.

Women in Film and Television International

Women in Film and Television International (WIFTI) are a US-based non-profit-making network with over 10,000 members worldwide. The network is dedicated to enhancing professionalism for women working in film, video and other screen-based media. They have partnered with two Ugandan-Americans based in Canada to open the WIFTI-Uganda Chapter.  Babirye, a professional film-maker and member of the WIFTI-Toronto Chapter says: “There is passion in Uganda to tell stories but we can no longer sit around the bonfire to tell the stories. Women have been disadvantaged and the chapter will give them a platform to tell their stories and shoot films.”  Some of her works include a film titled Silent Journey which rotates around a young woman grieving for a lost twin brother. The film also tackles the issue in Africa of burying the dead in a foreign land.

Babirye won an award to come to Uganda to showcase the film through the Canadian Council for the Arts, which was showcased during the fourth edition of the Amakula festival. The opening of the WIFTI-Uganda Chapter is advantages to the Ugandan female film-makers who will be exposed to training workshops for film producers, directors, camera operators and editing.  The Uganda Chapter will set up a database to be accessed by foreign film-makers who may come to Uganda looking for skilled film-makers. This will help open up job opportunities for Ugandan women.

Maisha Film Lab is another attempt to fill the skills gap in Uganda. Founded by widely-acclaimed filmmaker Mira Nair, Maisha Film Labis a non-profit organisation whose work is dedicated to the support and development of visionary screenwriters, directors, cinematographers, editors, sound mixers and actors in East Africa (Uganda, Kenya, Rwanda, and Tanzania).  Maisha aims to foster local voices from these regions. “We don’t make films.  We make filmmakers.  More aptly, we support aspiring filmmakers from all aspects of the film industry by offering hands-on training and mentorship’s with renowned film professionals from all over the world.”, Musarait Kashmiri, Programme Director.

Maisha provides specialised training in all of the technical aspects of production, as well as screenplay development and direction.  The centrepiece of Maisha’s year-round curriculum is an annual Lab for screenwriters, directors, actors, producers and technicians (editors, cinematographers, and sound mixers) held in Kampala, Uganda.  The participants in these labs receive instruction, professional support, and an opportunity to critique and develop their work with the guidance of film industry mentors from around the world. Since it was founded in 2004, Maisha has offered the following programs:

Maisha believes that developing a film industry in Africa could produce many benefits culturally, economically, and politically.   A long term investment in training will provide jobs and help raise the standard of living. Many of the graduates make a living working in the local film industry. Maisha’s mission is to preserve, cultivate and unleash local voices from these regions, and is the first targeted program to offer structured and accessible resources to these emerging filmmakers.

WBS TV Station is a venture from Spears Motor Group of Companies.  WBS TV is a commercial TV Station and operating on Channel UHF 025 with the objective to entertain, inform and promote cultural, environmental, and political awareness as well as social development and responsibility.  Their other stated objectives are to raise the standards of advertising in the country by producing quality commercials and develop local productions by producing good and relevant documentaries, magazines, and collaborating with other video producers.  Programming includes children’s programmes, series and feature films, soaps, music programmes, programmes about wildlife, environment, cultural topics, news, soap operas, religion, sports, politics and business.   Many of these are in-house productions, while others are acquired from international programme distributors.  This mix of local and foreign programmes attracts the biggest and varied audiences.

While there are some noteworthy initiatives, and local filmmakers are producing local content, there is a need for strategic intervention from the government to develop the infrastructure to support the local creative entrepreneurs. In the absences of a strategic framework for developing the media and creative industries, the sector growth will be limited.  This will require government leadership working in partnership with the private sector to develop strategy and policy for its creative industries which includes funding, training and education, talent development, infrastructure, distribution and technical facilities.