The African Youth Survey 2020: The Rise of Afro-Optimism 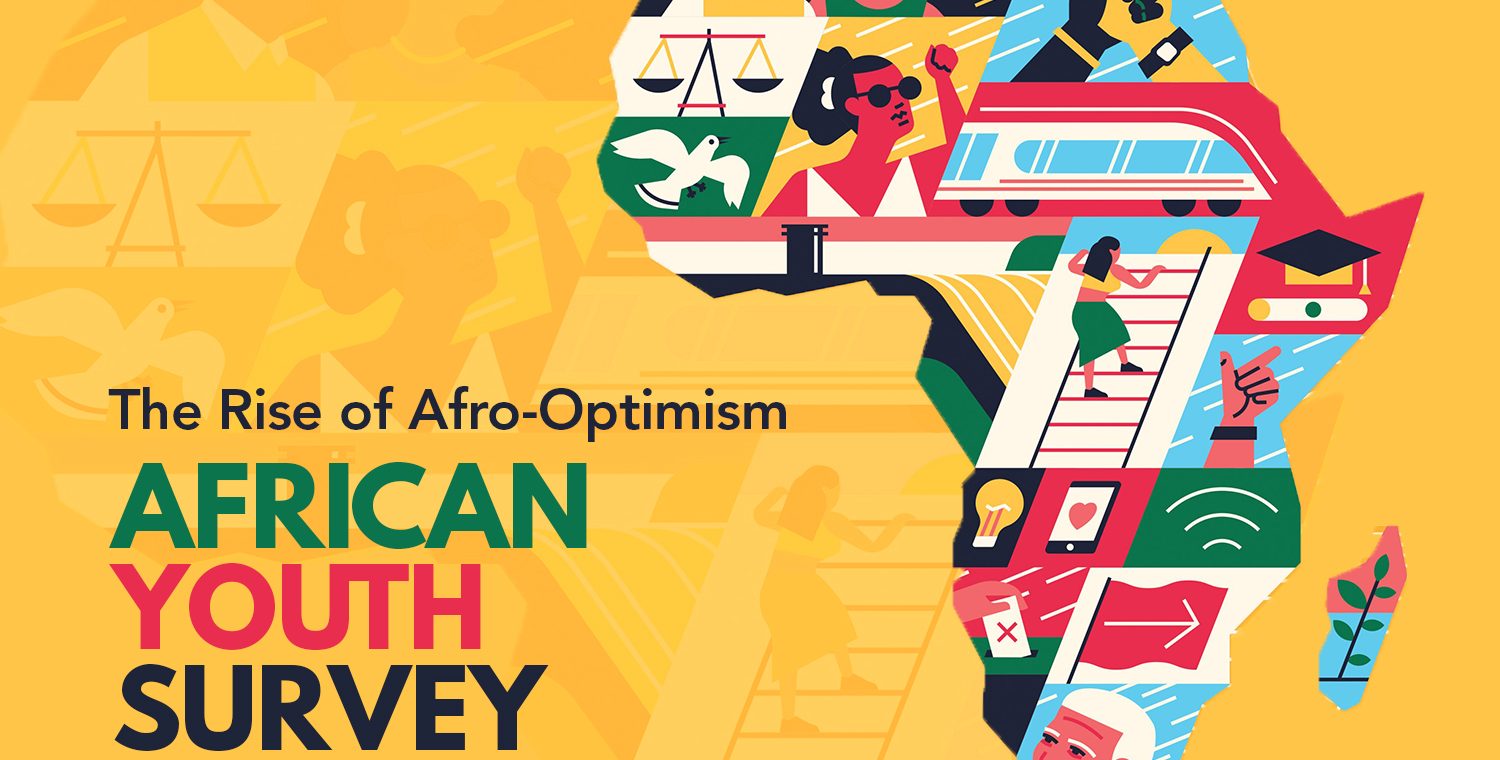 As Governments, business and civil societies across the African continent emerge from the global pandemic and its devastating health and economic impact, The African Youth Survey 2020, produced by the Ichikowitz Family Foundation is to be welcomed. It was launched in February 2020, just before the world went into lockdown, to present to the governments, the private sector, and civil societies with insights into African youth, and to help guide policy development.

Respondents were sampled from West, East and Southern Africa, from both Anglophone and Francophone. The countries included in the survey are Congo Brazzaville, Ethiopia, Gabon, Ghana, Kenya, Malawi, Mali, Nigeria, Rwanda, Senegal, South Africa, Togo, Zambia, and Zimbabwe. The sample consisted of 4,200 face-to-face interviews with respondents, with 300 respondents from each country. It was evenly split by gender, with respondents between the ages of 18-24.

In the words of Ivor Ichikowitz, Chairman of the Ichikowitz Family Foundation, the purpose of the study is to “change the stereotypes about Africa… through irrefutable quantitative data subjected to proper academic rigour, and to replace assumption with verifiable data.”

The report says there is a trend of Afro-optimism among young people in Africa, driven by a strong sense of individual responsibility, entrepreneurship, and confidence in an African identity.

KEY HIGHLIGHTS OF THE SURVEY

Here are some of the key highlights of the survey, providing insights into young Africans ideas about their future:

Afro-optimism: an emerging concept for young Africans who are looking ahead into an “African century”

African identity: showing that despite most respondents primarily identifying with their countries of origin, young Africans believe in a shared common identity

African unity: with youth expressing confidence in the African Union as a unifier and optimism about the future of the continent, believing that it should be united to tackle its challenges

Democratic values: most young Africans believe in participation, tolerance and freedom, despite being divided on their preferences for democracy versus stability (especially among young people from countries dealing with conflict) and believe more should be done to address sexual harassment and the rights of ethnic minorities.

Entrepreneurship: because the next generation of Africans is one of resolute and ambitious entrepreneurs, focused on bettering their lives.

Technology and media: as most respondents agree that technology will change Africa’s fortune for good, and believe that Wi-Fi is a fundamental human right, while also learning to navigate news sources, from local to international sources and social media.

Community cohesion: with many being committed members of their communities, believing in the importance of community and that it belongs to all who live in it, and confident that they can rely on their community members and effect positive change within their community.

Foreign relations: while cautious about neo-colonialism through foreign government investment and many viewing foreign influence as bad, African youth believe certain countries like the USA and national organisations like the African Union and European Union have positive influences on the continent and in their countries.

Environment: most young Africans were concerned about certain individual environmental concerns such as the illicit wildlife trade and water scarcity, and seek accountability from their governments to explore renewable energy, despite climate change not being as a significant social issue impacting Africa when compared to other social pressures such an unemployment and corruption.

Challenges ahead: African youth see infectious diseases and the rise of terrorism as significant events that have influenced the continent in the past five years, but identify addressing government corruption, job creation and peace and stability as the most important issues, for Africa to grow over the next five years.

I was especially interested in its findings with regards to African entrepreneurs, defined by the survey as Afropreneurs, who are likely to start a business in the next five years. They are likely to identify as people who are involved in their communities, and are also likely to be employed, have a primary education or higher, and be optimistic about the African Union’s ability to drive unity in Africa.

The survey found that two-in-three respondents already had ideas for businesses or social enterprises to benefit their community, and most respondents, if made leader for a day, would create jobs for the community and encourage entrepreneurship, as only 36% believe there are good job opportunities in their communities presently. These highlight that young Africans aspire to, and are well poised for, entrepreneurship, despite access to start-up capital being an overwhelming barrier.

Overall, 76% of the youth surveyed would like to open their own business in the next five years. If given $100, 49% would invest in, or start, their business, while 16% would invest in their education. 13% would save, a combined 16% would either spend it recreationally, on someone else, or on purchasing household goods., and only 3% would elect to donate it to charity.

Sectors: These aspiring entrepreneurs were most interested in the fixed retail sector, at 17%, followed by the technology and agriculture sectors as 10% each. Other industries chosen were finance at 8%, communications, mobile retail, and real estate at 7% each, and healthcare and fashion at 6% each.

Regions: Regionally, interest in agriculture-based business was 67% among Southern Africans, 63% among East Africans and 76% among those from West Africa. This indicates that initiatives to encourage youth in agriculture, such as Ghana’s work targeting young college graduates to start business or venture into agriculture was resulting in real impact; 70% of Ghanaian respondents were interest in working in agriculture.

Interestingly, the most entrepreneurial countries surveyed were Malawi and Togo at 90% each, and Senegal at 88%. South African youth were the least entrepreneurial, with only 47% intending to start a business in the next five years.

Social Impact: Respondents also emphasized social returns from their businesses, with 75% confident that their idea could positively effect change in their community and family (highest in respondents from Togo at 92%, Ethiopia at 88% and Senegal at 82%), and 63% reporting that they had an idea for a social enterprise to benefit people living in their community (highest in Togo at 81%, Senegal at 73% and Nigeria at 71%).

Learning from Failure: The survey also aimed to evaluate young Africans’ capacity for learning from failure and introducing efficiency, two aspects of building a thriving business. 77% of respondents admitted to trying to implement strategies that they perceive as better (mostly in Ethiopia at 87%, and Ghana, Rwanda, Senegal, and Togo each at 85%). Only 51% agreed that it was easy for them to accept failure as part of learning.

“We have found that there is a youth in Africa that is imbued with optimism about the future – and wants to shape their own destiny. We have found a youth that refuses to shy away from the very real challenges of Africa, that is honest about what needs to be done and what their role has to be to achieve this – and they are overwhelmingly keen to make that difference.” – Ivor Ichikowitz

Ivor Ichikowitz is a leading South African industrialist who has built a pan-African network of companies across the continent. I am delighted that he has committed to producing an annual African Youth Survey, so future policies concerning youth in Africa can be based on data analysis and insights.