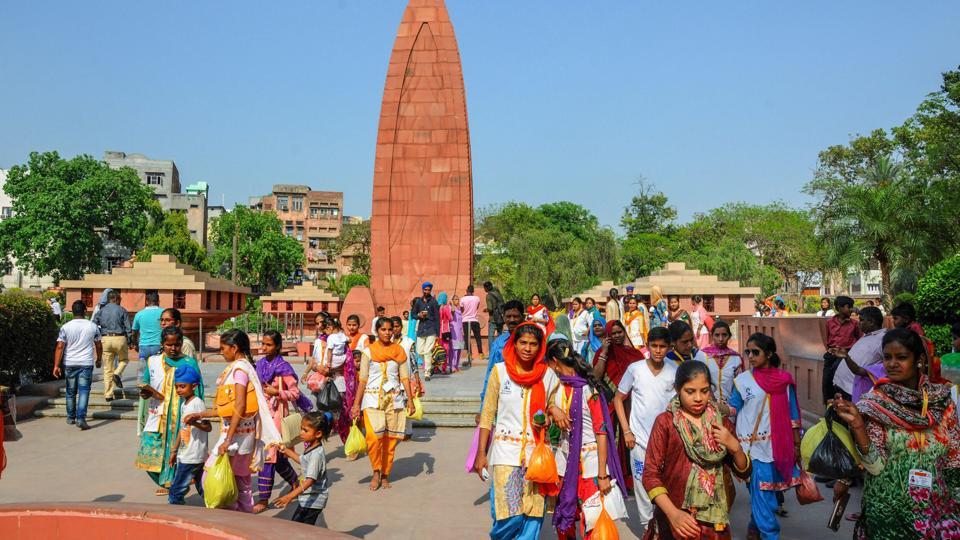 15 years after I came to England, on my first visit back to my birthplace in the Punjab back in April 1980; I found myself in Jallianwala Bagh, the site of a brutal massacre which took place on 13 April 1919.

On that day, a British officer, Brigadier General Reginald Dyer, ordered his men to open fire on around 20,000 innocent and unarmed men, women, and children.

The first thing that struck me when I walked into Jallianwala Bagh, was the beauty of this walled garden. It was so small, that there was no room to escape for the women, children, young boys, and girls, old men and women who had gathered to celebrate Vaisakhi, the harvest festival for people of the Punjab on 13th and 14th April.

Jallianwala Bagh is just 200 yards from the Golden Temple and after prayers, this was the place where families came to sit, eat, listen to music and to watch the Bhangra dancers associated with the harvest festival. It was also a place of political agitation for the Independence of India.

In April 980, the garden was a monument to the those who had died. Never to be forgotten are the walls with the bullet holes and the well into which so many fell when they were shot and as they tried to escape the bullets. I stood and wept.

I had read many accounts of this seminal moment in the history of the British Empire, watched the movies, and listened to the Punjabi songs about the martyrs who had sacrificed their lives for an independent India.

As I stood in Jallianwala Bagh, I recalled Bhagat Singh and Udham Singh, the folk heroes of the Indian independence movement. I recalled reading Udham Singh’s diaries from 1939 to 1940, written while waiting to be executed for the assassination of General Michael Francis O’Dwyer in 1940 in England.

Udham Singh was in the garden on 13th April 1919 and he vowed to avenge the dead no matter how long it would take him. I had studied lieutenant governor of Punjab Michael O’Dwyer and Brigadier-General Reginald Dyer, who not only approved of the shootings and had defended the actions and fortitude of the British soldiers who carried out their orders.

In April 1980, I was working with Edward Milner, an award-winning documentary film-maker who was making a three-part documentary series on the history of migration of Punjabi’s to England. My Father had arrived in England in 1963, from our village in Hoshiarpur, leaving behind his wife and three daughters. His intention was to stay for a few years, save enough money to rebuild the thatched roof house and pay for the dowries for his three daughters!

That never happened. The change in immigration laws meant he had to choose between leaving or bringing his family to England. So, in 1965, having never left my village, I travelled first by train to Delhi and then a plane to England.

I persuaded Edward Milner to engage me as a researcher for the Punjab to Britain series, because I could speak the language and I was going to Punjab anyway and he would not have to pay my airfare. He agreed and we met in Hoshiarpur when he arrived with his team. Our first shooting location was Amritsar, the Golden Temple and Jallianwala Bagh. The cameraman and sound recordist were the now famous Naresh and Rajesh Bedi brothers, Indian filmmakers, and wildlife photographers.

This was my first introduction to storytelling as we travelled across the Punjab filming with the main characters and interviewing experts, including the late Kushwant Singh, Editor Hindustan Times. Amongst them was an interview with my grandfather, a retired teacher who had resisted my Father’s call to join us in the UK.

He had seen the impact of the migration on his son who had left Punjab as a turban wearing Sikh and returned having cut his hair. In April 1980, I explained to my grandfather how he and many other Sikhs of his generation were left with no choice but to cut their hair if they were to get any jobs.

On my return from Amritsar to my home in Hoshiarpur, I asked my grandfather what the significance of Jallianwala Bagh to him was.

“Jallianwala Bagh is there to wake us up.” said my grandfather.

“If it wasn’t for this sacrifice, we would never have woken up to what was going on. Only then did we realise that the British were ruling through intimidation and division. They were sucking our blood. So, we all had to get ready to fight for independence.” He finished.

The first two programmes addressed the questions of migration, the challenges faced by the first-generation migrants like my Father coming to Britain in the late 50’s and early 60’s. The third programme in the series focused on my generation who were either born in England or like me brought here at very young age. My generation wanted equality of opportunity, social and economic mobility. We wanted justice.

For many of us of Asian descent fighting against racial discrimination in Britain, April 23rd 1979 marked a turning point when the police occupied Southall, where large numbers of people coming from the Punjab had settled.

On that day, many of us experienced first-hand the expression of state power when the police, provided the National Front with the protection to hold their meeting in the local town hall instead of banning them.

They dispersed and arrested hundreds of people who had gathered, just like in Jallianwala Bagh in April 1919, for a peaceful demonstration.

The clashes between the police and the youth of Southall on April 23rd 1979 resulted in the death of Blair Peach and hundreds of young people were arrested. Despite many witnesses who saw Peach being struck by police officers, no one was charged with his death. 40 years on, campaigners are demanding a fresh inquiry into the death of a protester, during a demonstration held to prevent the National Front holding a meeting in Southall.

Standing in Jallianwala Bagh, a year later in April 1980, I understood injustices never die, they live on to plague the present. In February 2013, I watched as David Cameron became the first serving British Prime Minister to visit Jallianwala Bagh. In the visitors’ condolence book, he wrote the following message:

“This was a deeply shameful event in British history – one that Winston Churchill rightly described at the time as “monstrous. We must never forget what happened here. And in remembering we must ensure that the United Kingdom stands up for the right of peaceful protest around the world.”

Indeed, we must never give up the right of peaceful protests as today, I watch the popular movements achieve change in Algeria and Sudan. Ever since my first visit to Amritsar in 1980, also known by its other name the City of Martyrs, I have made a point of going to Jallianwala Bagh, to sit in the garden and reflect.

In 2018, a statue of Udham Singh was unveiled outside Jallianwala Bagh, forever standing watch over the garden. When you next visit India, go to the Golden Temple in Amritsar and take a walk in Jallianwala Bagh, to remember the sacrifices of the freedom fighters and pay respect to the many who gave their lives for an independent India.

For this was a moment when the caste, class, religious and language divisions of India came together not for themselves but for the country. For me Jallianwala Bagh is not just about a colonial past but about humanity today.

Punjab to Britain series can be found on the Open University website.