DOCUMENTARY FILMS TO WATCH IN 2019- Bombshell: The Hedy Lamarr Story 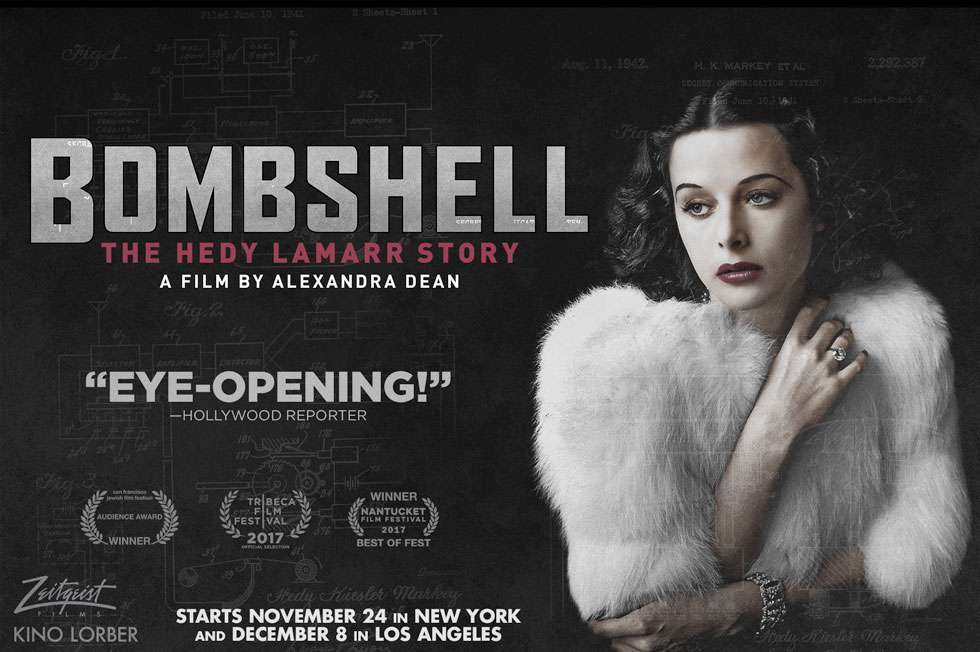 Bombshell: The Hedy Lamarr Story is heart-breaking film about a remarkable, pioneering woman from Hollywood’s golden age. This ravishingly beautiful actress of the 1930’s and 40’s, Hedy Lamarr, was also the secret inventor of technology which became the basis of Wi-Fi, Bluetooth, and GPS communications of today.

This American biographical documentary film is directed, written and co-edited by Alexandra Dean, who had spent years covering innovation and technology for Bloomberg Television and Businessweek.

In the time spent at these organisations, she noticed that most of the inventors they profiled were men. This prompted her search to find the women coming up with brilliant original ideas and eventually led to her reading a book by Richard Rhodes on Hedy Lamarr. Here was a role model whose existence was oblivious to the world as she was only recognised as a movie star. After this amazing discovery, she (Alexandra) embarked on the film project documenting Hedy Lamarr’s life.

Hedy Lamarr who was originally named Hedy Kiesler, was born in 1914 to well-off cultured Jewish parents in Vienna, Austria. The film follows the life story of Lamarr from her youth as the daughter of Austrian Jews, her rise to fame, the Nazi onslaught, her departure for the United States, six marriages, her acting career, her landmark invention, decline, and finally her death at the age of 85 in the year 2000.

What fascinated me about her was not the unhealthy relationships she had with the men of Hollywood at the time but her mind and ingenuity as an inventor. As she clearly stated, inventing came naturally to her but unfortunately, Hollywood was not interested in her brain but her body and looks.

Nevertheless, after a day in the studio shooting her scenes, at night she worked on her inventions, many of which failed. The focus of this film is on the one that worked and yet never earned her any recognition or money!

In 1941, incensed by the bombing by the Nazi’s she developed a secret radio system that would allow the Allies to torpedo Nazi U-Boats with deadly accuracy. However, her sketches remained ideas until a chance encounter with an eccentric composer, George Antheil enables her to transform them into useful technology.

The patent was granted in 1942 and the military took the idea and eventually developed it. But Lamarr was advised that the best way she could support the war efforts was as a pinup, entertaining troops, selling war bonds, and selling kisses. It was not until her obituaries were published in 2000, that she her invention became widely known and she emerged as the icon for women in science.

Watching Hedy Lamarr, I made another discovery. I must admit, as an avid film watcher, I have not seen many Hedy Lamarr movies from the 1930’s and 40’s— I will now!

Her face kept reminding me of the 1930’s and 40’s Bollywood movies of the silent era. While searching about Hedy Lamarr, I stumbled on a review of a documentary film Shalom Bollywood: The Untold Story of Indian Cinema, by Danny Ben-Moshe.  I was stunned to learn that the women were in fact Jewish actresses from India’s small Jewish community, who faced no great cultural taboos about performing in public and who emerged as Bollywood’s first megastars, including Sulochana, Pramila, Miss Rose and Nadira.

Watching Hedy Lamarr, it is clear to see how the Bollywood Jewish actors of the silent era had learned a lot from the Hollywood stars of the time. I am now looking forward to watching Shalom Bollywood: The Untold Story of Indian Cinema, by Danny Ben-Moshe which tells the remarkable story of these forgotten actors.

Bombshell: The Hedy Lamarr Story is a must see film for your education, information and inspiration.