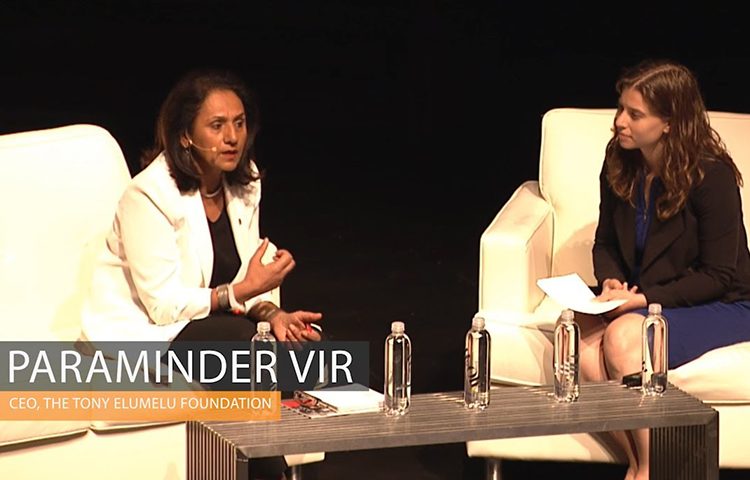 The Tony Elumelu Foundation continued its mission to change the perception of Africa and the African narrative at the first Devex World conference, a gathering of global development professionals from the public, private, and non-profit sectors held in Washington DC on 14th June 2016.

Early in the day, I had the pleasure of speaking with Devex President and Editor-in-Chief Raj Kumar about his views on the future of development. He said the industry is likely to change over the coming years, with private sector actors, government agencies, foundations, and initiatives like the Tony Elumelu Foundation Entrepreneurship Programme changing the face of the traditional aid landscape, and broadening the tent. He praised TEEP as exemplary of this new model of development: bottom-up instead of top-down, with “Africans private sector, SME’s and entrepreneurs leading the way.”

This was a theme I reiterated throughout the day. Led by the economic philosophy of Africapitalism, espoused by the Foundations Founder Tony Elumelu, the development of Africa will be accomplished though the hard work and brilliant ideas of young Africans, not the aid of international donors. Africa is “home to the world’s youngest population and the largest pool of untapped talent.” Through the Tony Elumelu Entrepreneurship programme, we providing opportunities and institutionalise luck for this untapped talent and building a pan-African entrepreneurial class. Through their business, they will shape the economic growth of Africa. It was good to hear that the many of the multination companies are beginning to change the way they give and invest in Africa. For example Sass, co-founder of the start-up Andela, which selects and trains African software developers before placing them with Western tech companies.
In conversations with participants, and an audience of 200, I shared the story of TEEP and our inspiring entrepreneurs, who are finding innovative ways to fill gaps in the market and build businesses that generate wealth, create jobs, and fill demonstrated needs. Before giving remarks on a panel on business transforming development, I was able to share the trailer to the newly released TEEP documentary (which you can watch on YouTube here  http://bit.ly/TEEPdocumentary) bringing the excitement and energy of the entrepreneurs in the film directly to the assembled audience of development experts in Washington, DC.

During the panel discussion, I had an opportunity to have a deeper discussion about the challenges and the opportunities for the economic development of Africa, the level of risk we are assuming with TEEP, and the human capital in Africa. I had an illuminating exchange with fellow panelist Amie Batson, Chief Strategy Officer of PATH, about the valuable human capital in Africa; who agreed, “The creativity and knowledge are already there.” With TEEP, we are building a pipeline of enterprises across diverse sectors which companies like PATH to tap into for their programmes.

TEEP Documentary Screening
Aside from the Devex conference, the highlight of the trip to Washington was the official launch of the documentary, Tony Elumelu Entrepreneurs Transforming Africa at an event hosted by the World Bank/IFC Young African Society. The intimate gathering was a wonderful opportunity to showcase the Foundation and TEEP to young African Diasporas and other young professionals in Washington who are interested in Africa. The film is a powerful piece of storytelling which conveys the energy and the experiences of the TEEP entrepreneurs better than any words can express.

In the Q&A following the film, the audience was keen to understand how the Foundation was integrating the Tony Elumelu Entrepreneurs into the wider ecosystem. We are doing this through collaborations, partnerships and alliances with Universities, Business Schools, Incubators and Hubs, Government and policy makers. Tony Elumelu is leveraging his convening powers and circle of influence to introduce them to the presidents so they can meet the entrepreneurial class we are growing through the Foundation. The burning question is always, what is the role of the African diaspora and does the Foundation have plans to replicate TEEP in US or Europe? At the Foundation we believe the young Africans as members of the diaspora, have a critical role to play. They can help amplify the work of the Foundation to help change the perception of Africa in Washington, DC and elsewhere, by spreading positive stories about Africa’s rise, and pushing back against negative stereotypes. They can study the market opportunities across the 54 African economies and develop solutions. Their intellectual capital, more than money is what will drive the growth of Africa as I have seen the Indian diaspora do for India.

I was thrilled to be able to interact with a few of our entrepreneurs and mentors at the event, confirmation that the work of the Foundation and TEEP is truly global. They shared their own experiences of the value they have derived from the programme both as mentors and entrepreneurs; hear updates on how their businesses were developing, and how they were addressing the new challenges, such as foreign exchange restrictions and how the Foundation had changed her life.

The Foundation looks forward to working closely with World Bank/IFC Young African Society to continue the conversation with its dynamic membership to help change the African narrative and amplify the work of the Foundation.