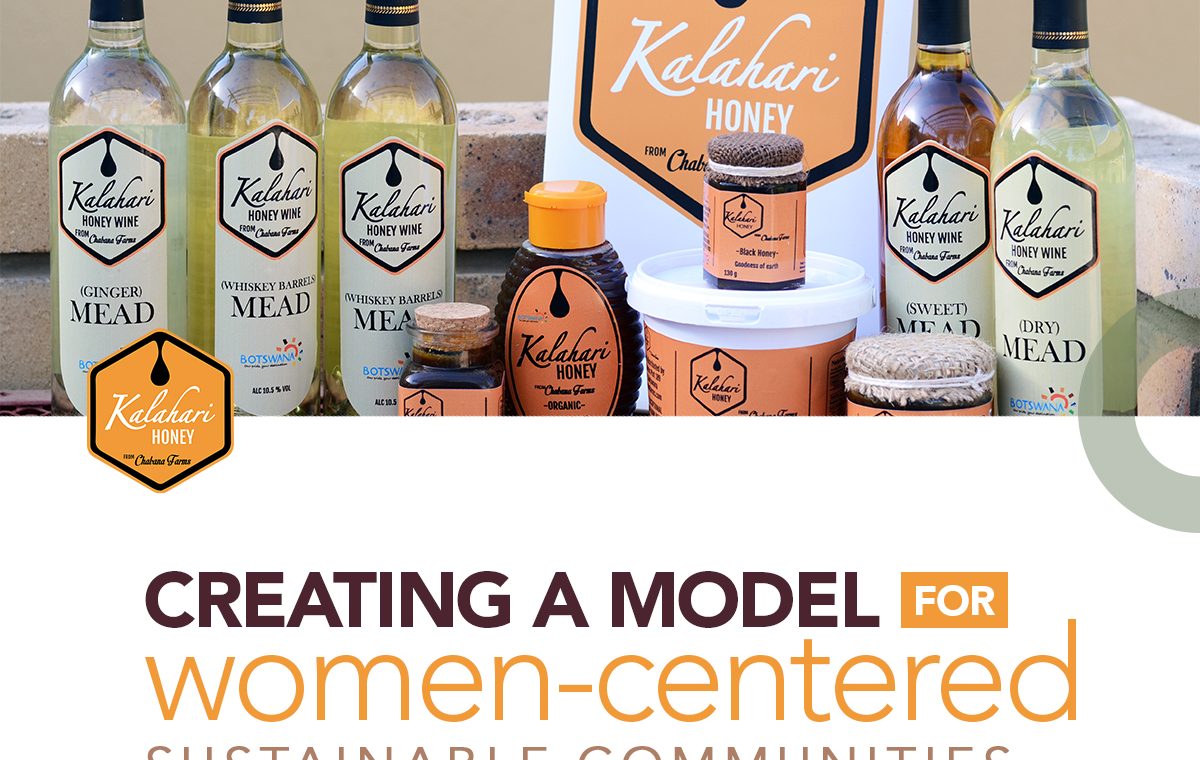 Mavis Nduchuwa is the founder and CEO of Kalahari Honey, founded in 2015 and based in Botswana.  Kalahari Honey is an aggregator, using beekeeping as a tool to build sustainable communities and mitigate human and wildlife conflict. Kalahari Honey’s mission is to “bring balance between humans, wildlife and the environment we live in”.

Kalahari Honey trains and supplies farmers with beehives and buys honey from them at subsidised rates. The honey is processed and sold as organic honey and honey wine to consumers and distributors around the world, and part of the profits are used to set up another set of beekeepers.  This system also allows the farmers to eventually have full ownership of their hives through a payment model, meaning that they can sell to any aggregators and distributors if they wish.

Botswana, where Kalahari Honey’s bee farms are based, is home to the world’s largest elephant population. Unfortunately, every year, interactions between farmers and elephants leads to loss of crops, and loss of lives among the country’s farmers. This is a significant problem because 80% of the population practices some form of agriculture. Kalahari Honey’s ingenious model allows these beehives to also function as living fences, keeping elephants away from farms.

Over 95% of Kalahari Honey beekeepers are women. Through their work producing and supplying honey, they are being empowered and earning more, resulting in a decline in gender-based violence as these women gain economic independence. As they earn, they are also improving their quality of life, building brick houses to replace their mud houses and sending their children to school. With this business model, Kalahari Honey is building sustainable communities while addressing six of the SDGs, using beekeeping to mitigate human and wildlife conflict and providing economic empowerment for over 800 women farmers in its network.

Other benefits of this model include food security and wildlife conservation, as farmers can safely harvest their crops and do not have to shoot elephants. With over 5000 beehives, the business is also contributing to pollination and land restoration efforts.

Kalahari Honey recently launched a demo farm on its grounds, to train even more beekeepers and meet the growing global demand for its products. Unfortunately, the COVID-19 pandemic restricted the farm from reaching its intended potential, interrupted fund-raising efforts and halted certain distribution channels. But in 2021, the demo farm intends to train 500 more women to be beekeepers, and to grow its network of farmers. Kalahari Honey is also working to scale to other markets, and because Botswana is landlocked, establish a warehouse in nearby Namibia to help with global shipping. The company is also actively looking to build partnerships for distribution and warehousing in the EU and the US as demand grows. According to Mavis, honey is a US$7 billion industry that Africa should be encouraged to tap into, especially through engaging in more aspects of the value chain.

In the year ahead, Kalahari Honey also plans to better promote conservatism, building platforms to connect farmers to their customers, and providing tablets to its farmer network to educate them on plant diseases. They also plan to carry out more research, especially by engaging with young people and technology to collect data on bee declines, and to find ways to building smarter, more sustainable beehives. Part of their plans to adopt more technology tools will also involve developing apps to ease online sales with global customers. The company is also exploring venom manufacturing, and is recruiting and training young entrepreneurs to be involved in that value chain. Kalahari Honey is fully connected with people in local communities in Botswana, and is retaining young talent across various sectors.

Speaking on how governments can support SMEs and farmers, Mavis notes that the Botswanan government has provided some training programmes and grants for entrepreneurs. However, she adds that the implementation of many of these projects have been poor, and that many businesses birthed from these projects are not sustainable and fail within their first year, likely due to a lack of business mentorship.

Mavis’ message is simple: we can do so much within Africa to transform our own communities, and ensure that they are sustainable. Although manufacturing within Africa is at its infancy, it has the potential to transform the agricultural sector if value chains, from production to processing and packaging, can be retained on the continent.

For African SMEs to thrive across the continent, as consumers, we can support them by buying Made in Africa. You can support Kalahari Honey by buying their products here.