Bill Traylor: The Story of the African American self-taught artist born a slave 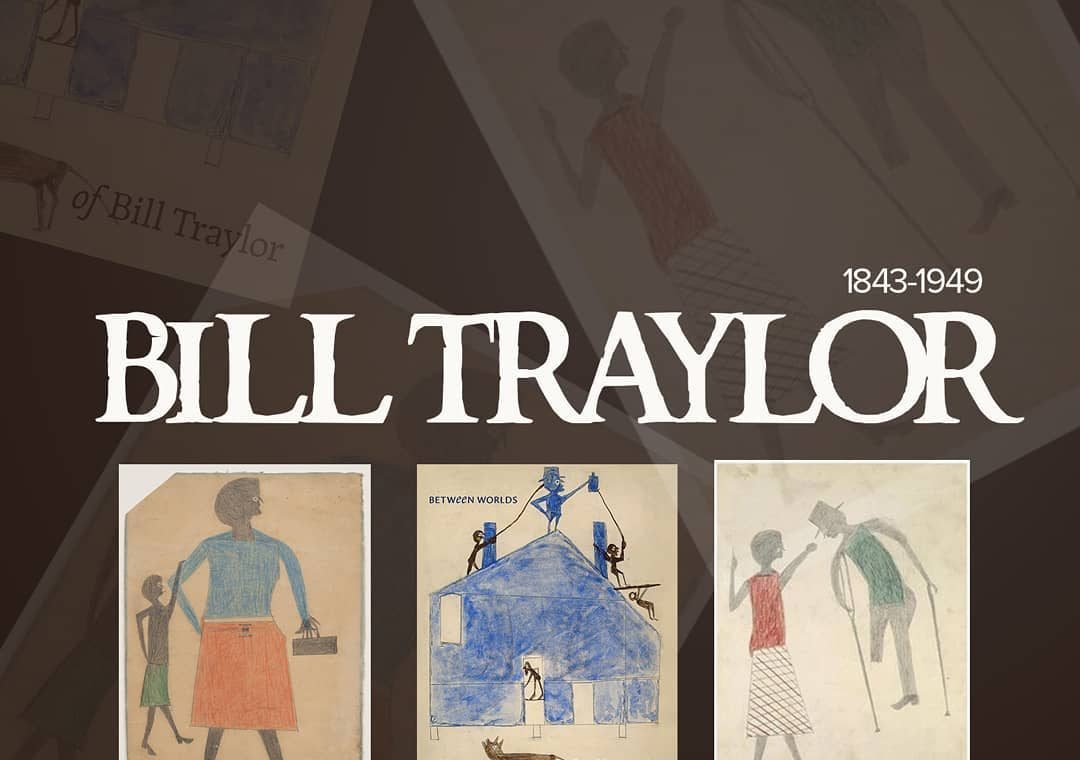 Somewhere in my loft is my research file, marked Bill Traylor, an African-American self-taught artist. This would be 1986 when I joined the BBC as a Researcher on the Saturday Review, a weekly arts magazine show in the Music and Arts Department. In my research for the show, I had come across this extraordinary painter at The Mayor Gallery, London. I fell in love with his paintings and his story.

Born a slave on a plantation in 1843 in Alabama, he worked as a sharecropper and then as a labourer in Montgomery where he moved in 1928. He was already 85 years old when he started drawing on the sidewalks, using everyday materials like cardboard packaging on which he made works that he sold to passers-by. It was on this sidewalk that he met Charles Shannon, a painter and teacher, in 1939. I recall reading how he gave Bill drawing materials, pencils, and paint and helped him with his first exhibition in 1940.

Inspired by what I had seen, read, and heard: how he was self-taught, his paintings were simple, powerful, personal, and unique. They are a record of a particular time and place, lyrical and incredibly moving. Excited, I made my pitch to the Editor of the show to do a feature on Bill Traylor. But sadly, like many of my other story ideas featuring black or Asian artist, my story on Bill Traylor, did not make the cut and it was never commissioned.

It was tough being the only black person in the department, pitching black stories. Six months later, I would leave the BBC to pursue an independent route to making films and set up my own production company. Postcards of Bill Traylor’s paintings would adorn my notice board for decades until we moved home, and I packed my files into the loft of our new home.

It takes the protests of Black Lives Matters, for newspapers like the Guardian today, to shine a light on the extraordinary black talent that has always been there. Reading the article by Dalya Alberg in The Observer, I learn that one of his paintings was brought by Steven Spielberg who gave it as a gift to Alice Walker which she has now sold for $507,000 through Christie’s New York!

Bill Traylor had sadly died penniless in 1949. He left over 1200 drawing. He was important. He had a point of view and he did matter. Charles Shannon resisted selling his work when offered a few dollars in the 1940s.

The article reignited my interest in Bill Traylor, and I went in search of what had become of his work, his contribution to the world of art, his incredible life story. Three plus decades since my introduction to Bill Traylor in 1986, I found today he is considered a world-renowned artist. Today, the artist’s works are held in the collections of the High Museum of Art in Atlanta, The Museum of Modern Art in New York, the Philadelphia Museum of Art, the Smithsonian American Art Museum in Washington, D.C., and the Milwaukee Art Museum, among others.

In October 2019, to mark the 70th anniversary of his death, the City of Montgomery unveiled Bill Traylor History Marker located on the street where Traylor used to sit and paint. I stumbled upon a beautiful documentary film Bill Traylor: Chasing Ghosts by Jeffrey Wolf who was first introduced to his work in 1982!

Leslie Umberger, curator of Folk and Self-Taught Art at the Smithsonian American Art Museum has written a book, published in 2018. Between Worlds: The Art of Bill Traylor features 205 of Traylor’s artworks along with 83 supplemental illustrations, city map of Montgomery, family trees, a timeline of key events from Traylor’s life and an extensive bibliography. In Umberger’ s book, lovingly researched chapters offer a richly woven tapestry of social history, biography, and art history of 19th and 20th century Alabama and how it shaped Traylor and his art. The chapters explore Traylor’s life and position his art against the backdrop of the life, concluding with an examination of the posthumous attention Traylor’s work has garnered.

In 1986, Charles Shannon, when asked what made Traylor’s work important, he responded: “What made his work great is like trying to answer, ‘what is grass?’ The rhythm, the interesting shapes, the composition, the endless inventiveness – it all reflects such a wonderful joy of living. His whole sense of life comes through. It was just the man. I think he was a great man. It is not so much how he depicted or what he did. It was just the soul of the man.”

The power of art is if stays with you and as I have travelled across the African continent, and the Caribbean, I have glimpsed the essence of Bill Traylor’s soul in the folk, naïve, self-taught, primitive arts I have seen made by artists from Africa and of African descent. Viewing these works in galleries, homes, and marketplaces I have often said oh, this reminds me of an artist I came across in 1986 in a gallery in London.

Reflecting on my experience of pitching black centric stories to mainstream media – never give up, but find different ways of telling the story, because our stories matter. Now, let me go find my file on Bill Traylor and bring out the postcards of his paintings I had brought and put them on my notice board in my new study.