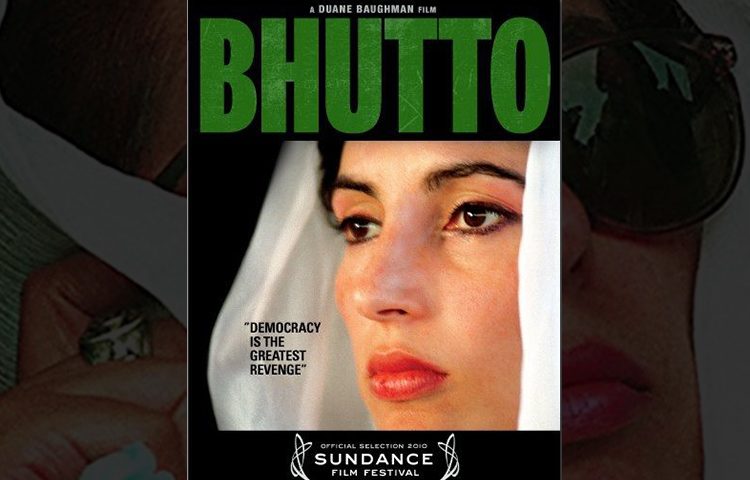 BHUTTO On Saturday 12th June I was invited to the UK Premier of BHUTTO, a feature length documentary film by director/ Produce Duane Baughman. The screening was attended by filmmakers and members of the Bhutto family including her son Bilawal Zardari Bhutto, the chairman of the Pakistan People’s Party. BHUTTO is the first definitive documentary chronicling the life of one of the most complex and fascinating characters of our time, Benazir Bhutto. Benazir Bhutto was born into a wealthy landowning family, often referred to as the “Kennedy’s of Pakistan”, that rose up to become Pakistan’s dominant political dynasty. Her epic life story is a tale of Shakespearean dimensions involving a woman battling for democracy, and equality with the most dangerous place in the world as a backdrop, Pakistan. Her father, the first democratically elected president of Pakistan, chose Benazir over his eldest son to carry his political mantle. Accused of rampant corruption, imprisoned, then exiled abroad, Bhutto was called back in 2007 as her country’s only hope for democracy.

When she was struck down by an assassin, her untimely death sent shock waves throughout the world, transforming Bhutto from political messiah to a martyr in the eyes of the common people. Benazir Bhutto was born into a wealthy landowning family, often referred to as the “Kennedy’s of Pakistan”, that rose up to become Pakistan’s dominant political dynasty. With exclusive interviews from the Bhutto family and never-before-seen footage, the filmmakers have crafted a sweeping epic of a transcendent, yet polarizing, figure whose legacy will be debated for years to come. After a breathtaking opening flashback, Bhutto serves up an eye-opening dose of Pakistan’s tumultuous 62-year existence, its frequent violent clashes with India, and Benazir’s own family history that runs deep in the DNA of Pakistan’s feudal past.

The film has been released in Pakistan and playing to packed houses across the nation. This is the first time that people have paid to see a documentary film in the country’s theatres. Bhutto, which was produced by Yellow Pad Productions in association with Icon TMI presents a Duane Baughman Film, directed by Duane Baughman and Johnny O’Hara. Produced by Duane Baughman, Arleen Sorkin, Mark Siegel and Amy Berg. Executive Produced by Glenn Aveni. Co-Produced by Pamela Green, Jarik Van Sluijs, and Darius Fisher. Written by Johnny O’Hara. Music by Mader, Hank Graham Jr. and “Dila Teer Bija” performed by Stewart Copeland and Bakhtawar Bhutto Zardari. BHUTTO will be released by Mara Pictures across the UK and I would urge you all to go and see this film. The film is clearly made with a western audience in mind and a fantastic introduction into the complex political landscape that is Pakistan. The next generation of Pakistanis, living in the west should see this film to understand and debate the future of this extraordinary country.