Beyond the Visible: Hilma af Klint, directed by Halina Dyrschka 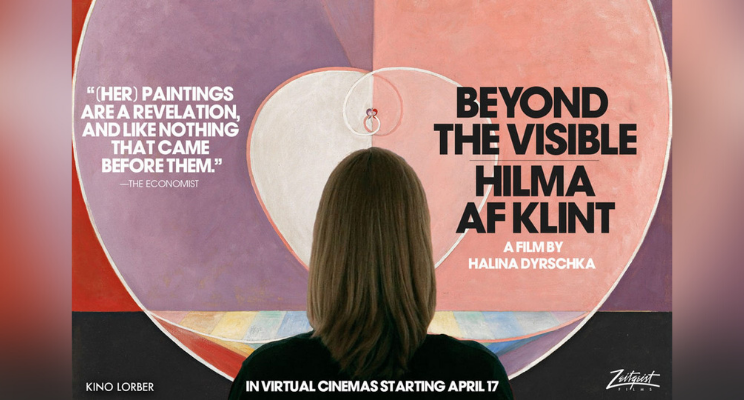 In January, I shared an article on a documentary film about the iconic Mexican artist Frida Kahlo. Today, I want to share the extraordinary story of another woman artist – Hilma af Klint.

As part of my BAFTA 2021 awards, watching the documentary, Beyond the Visible – Hilma af Klint, led me to discover an astonishing artist who left behind a remarkable body of work which is brought to life in this moving, course-correcting documentary film by the German filmmaker, Halina Dyrschka. Watching the film with my husband, Julian Henriques, sparked so many conversations and led him to buy me two beautiful books: Hilma af Klint: Paintings for the Future and Hilma af Klint: Notes and Methods.

What drew me to her were the paintings she created between 1906 – 1915, which she called The Paintings for the Temple and her connection with the Theosophical Society about which I know a considerable amount through following the teaching of Jiddu Krishnamurti. I was stunned and inspired by the sheer magnitude, beauty and power of The Paintings for the Temple, a product of her commune with the higher power. The 193 paintings she painted are huge, colourful, sensual works unlike any other I have seen. They are her most important work, a gift of knowledge from the spiritual world.

In one notebook, she described how she was inspired. “I registered their magnitude within me. Above the easel I saw the Jupiter symbol which shone brightly and persisted for several seconds, brightly. I started the work immediately preceding in such a way that the pictures were painted directly through me with great power.” The two books sit in my study and every day, I open a page to reflect and meditate on the power and deeper meanings of these paintings. I long to see The Paintings for the Temple in a museum when this lockdown is finally lifted. What a gift this wonderful artist, who for so long has been unknown, has left the world! Using her journals and writings in Hilma’s own words, the director gives us a glimpse into her consciousness.

Hilma af Klint (1862-1944) was born in Sweden, and was an abstract artist before the term existed, a visionary, trailblazing figure who was inspired by spiritualism, modern science, and the riches of the natural world around her. In the documentary, the director Halina Dyrschka not only describes the life and craft of Hilma af Klint but also the process of mischaracterization and erasure by both a patriarchal narrative of artistic progress and capitalistic determination of artistic value. They called her a crazy witch! In an interview Dyrschka says, “it’s easier to make a woman into a crazy witch than change art history to accommodate her. We still see a woman who is spiritual as a witch, while we celebrate spiritual male artists as geniuses.”

When she passed in 1944, Hilma left more than 1,200 works and 124 notebooks to her nephew who was instructed not to allow her work to be opened until 20 years after her passing. She had realised that the world was not ready to fully appreciate her work! Now, over 75 years since her death, she is being recognised as a pioneer.

But let me share a quote from the science historian Ernst Peter Fischer, featured in the documentary, who believes it is us rather than Hilma af Klint who requires reviving. “We know that the universe is made up of 95% dark matter but the strange thing is nobody gets excited about this. I think our world has become blurred, stupid, dulled unless somewhere out there there’s a Hilma af Klint painting it all, so in a hundred years we will see what we’ve missed. In 1900, we still know how to marvel. Today we sit in front of our iPhones and media and are bored!”

Can we marvel anew, I wonder?

I profoundly believe that documentary films have the power to change our perceptions of the world! They take you into worlds unknown, bring untold stories to light, connect us and spark curiosity. Beyond the Visible – Hilma af Klint is a truly fascinating story of the mysterious, unacknowledged life of a pioneering artist, a beautiful ode, a film worth seeing and an artist worth discovering.

Watch the film trailer here and stream it here.