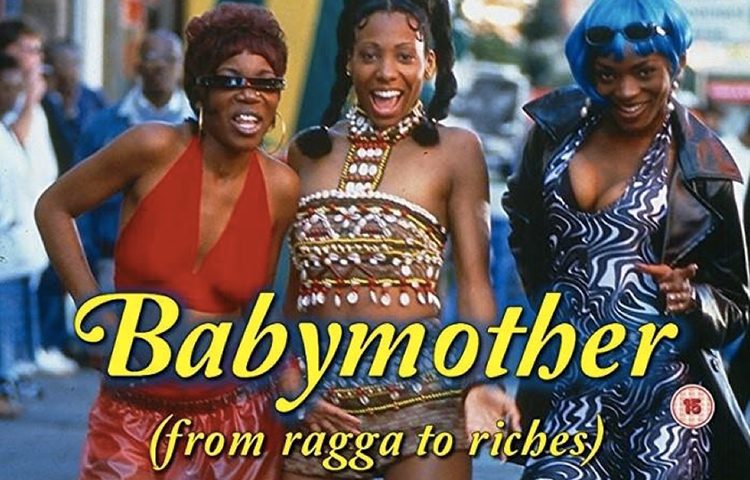 TheBritish Film Institutelists  Babymotheras one of top10 great black British Films. Babymother is a reggae musical, alive with the vibe of the London streets, the fashions and glittering magic of the dancehall. The film features music by Beres Hammond, Carroll Thompson and Cinderella. Set in Harlesden, Babymother opened a window on a very distinctive world, hidden away in North West London. The heart of the film is Jamaican dancehall and its beat is reggae music.

Babymother was released in September 1998. September 2018 marks the 20thanniversary of the UK wide release of our feature film. In September 1998, Babymother premiered at the Toronto International Film Festival where it was picked up for US release.

Twenty years on, I am writing this article, sitting in Lagos, Nigeria, home to Nollywood, the world’s third largest producers of films and where I currently work.  In this article I want to share the story of making Babymother twenty years ago, the essence of the film, the location, the music, the cast and what inspired me to produce Babymother.

‘Most of what we call culture is rarefied – put in boxes and sold as tickets. What I wanted to do was show something different. This world has its roots in black British working-class culture. It is organic, developing and is a way of life. Within this uniqueness however, the stories we tell are universal – a woman trying to find her voice, mother-daughter relationships, men and women’.

The film represented a conscious attempt to avoid the typical ‘burden of representation’ that continues to sit heavily on Black British films. Babymother isn’t concerned with the ‘problems of life in the inner city associated with racism and deprivation’. Instead it celebrates one aspect of Jamaican life in London – ‘dancehall’, with its distinctive musical style and dramatic costumes. You can read the full story synopsis here.

Our first feature film, the development and the making of Babymother, spanning five years, was often nerve wracking but ultimately rewarding as our vision grew into a film which we are both immensely proud of to this day. I was 8 months pregnant with our second daughter who was born in February 1993.

Babymother is a film bursting with music, the story told in the lyrics on the lips of the characters. The music lives, breaths, and dances through the whole film. Babymother is a film about ambitions and passions everyone can connect with. Its theme is universal – a love story. It captures its own unique corner of life – a world with all its own slang, style, walk, music, and attitude.

Babymother is a London film from one little know part of London called Harlesden, the hard core of reggae in Britain.  We chose Harlesden as the location for Babymother, not just because Julian and I have lived in North West London since the 1980’s, but because it has and continues to be an important centre for black music since the first Caribbean immigrants settled in the capital during the 1950’s. Harlesden’s black community has built a thriving music industry almost wholly independent of outside help. Reggae music has been at the hub of this industry and as DJ Super Flex who wrote many of the lyrics for the musical says:

“We deal with reggae music round the world and come back so that that’s why we beat out reggae music non-stop”.

Julian chose to set Babymother in this world because:

“I wanted to go to the heart of the music, so locating the film in Harlesden made sense. It has its own source of development, its own future, and its own past. It is the real reggae centre of the UK, rivalling even Kingston, Jamaica for its productivity and its originality”.

Harlesden’s music business: the independent record labels, the recording studios, the pirate radio stations, and the sound systems all featured in the movie. The record pressing plants, the music distributors, the record shops, and of course the dancehalls were the constant backdrop of the film, the different limbs that made up the body.

During the years the film was in development from 1993 to 1997, Julian and I went on a journey in search of the lyricists, composers, and producers who could put sound to the vision of the story. We ran a number of workshops, talking to a multitude of musicians and performers both locally in Harlesden, nationally in the UK and also in the home of reggae music Kingston, Jamaica. The music score for Babymother covers a  range of reggae inspired and related styles such as Ragga, Dancehall, Lovers Rock, Street Soul, Jungle, Drum and Bass. The film reflects the mix that fills the streets and estates of west London. From this intense research, Julian developed the musical scape for the story:

“None of the people who were eventually commissioned to write the songs had ever written to a brief before and I think what they have produced fits each scene extraordinarily well. Every character has a sound and a vibe of their own. I also think the mix between international stars and local heroes is just right”.

Many of the lyrics were written and performed by local artists who were not used to working to deadlines, sometimes not used to writing music down. The conventional way to produce music is to have one songwriter, one producer, one studio. We chose the unconventional way. This put a huge pressure on getting the actors to learn dancehall moves and songs, to record the music as well as rehearse the script. I would often find myself leaving a studio at 3 in the morning, only to return to the set at 6am!

Babymother cast was a mix of award winning professional actors and non-professional actors, a decision the director made when he met Diane Baily when he cast her in his short film ‘We The Ragamuffin’. Popularly known as ‘Militant Dee’she w played Bee in Babymother. She also inspired the idea for the film through her talesabout her life, how she really enjoyed going to the dancehall with her girlfriends, rather than with guys. Something in the that conversation stayed with me and became the seed for Babymother.

Diane, coming from the dancehall scene, had no problem relating to Bee:

“I liked playing her because she had to be different people, something I recognise. She can be nice, but when it comes to business, she can never let down her front. She can’t afford to be seen as vulnerable”.

The world of dancehall, as I was to discover in our research period, was dominated by men from the owners of the sound systems to the DJs. It was a delight to cast this newcomer and her intuitive style certainly impressed the professional actors on the set.

Casting Don Warrington as Luther was another coup. Best known as Philip in the hit comedy series Rising Damp, and acclaimed as classical actor, playing Luther in Babymother was a real departure:

“I was surprised even to go up for this part. I thought there must have been some kind of mistake. It’s certainly not the sort of part I’m usually considered for, so it was a wonderful opportunity to show I could do something different”.

He also liked the fact that here was a story which focused on the lives of black people and not in thrall to white people. As the Producer, I must commend David Aukin and the Arts Council who fully funded the film’s £2 million budget and never once asked, “why are there no white characters in Babymother”?

The most fun we had was casting Anita, Sharon, and Yvette, because none of them were of Jamaican origin which only goes to show the impact of Jamaican culture, fashion, and music on all of us growing up in the UK. Anjela Lauren Smith who played Anita was born in London to parents from Barbados. Caroline Chikezie, who plays Sharon is British Nigerian and Jocelyn Esein, who plays Yvette is also of Nigerian origin! Twenty years ago, I never for a moment imagined that I would find myself living and working in Nigeria – the country of their origin.

When you look back on your life, there are a few defining moments that you will cherish forever. The making of Babymother was definitely one of them. I joined the film and television industry in 1986 and within one decade, I was producing my first feature film from our loft in North West London. By the time we went into production of Babymother in April 1997,  I had already worked as a series researcher on the Redemption Song, a seven part documentary series about the history, people and cultures of the Caribbean, and gone onto produce award-winning programmes as diverse as Cinemama, Voices from Ramadhan, Algeria and On the Borderline Iran,  two series of Developing Stories, and the Unofficial Version for La Sept/Arteto name but a few.

But nothing prepares for the experience of the production of your first independent feature film. It was a steep learning curve and often nerve wrecking. On top of the conventional challenges associated with making films we were making a musical, not just any musical, but one set in a community which brought its own demands. How was I to explain street culture to the accountants and financiers? Organised criminals in the area wanted a slice of the cake. I arranged a meeting between two local godfathers and let them sort it out. Whatever they agreed, we were not troubled and not one item was stolen. The decision to employ local guys who run things as our security men was one of the best.

Babymother was released as a black film in the UK but when it was shown abroad it was always viewed as British. Making Babymother, gave me an entry into the British film industry and in November 1999, a seat on the board of the new the UK Film Council. I took my learning to the board room in the hope that it would make it easier for other people to go from their dream to the screen.

Even though black films are still a novelty, the BFI’s attempt at curating the history of the Black British Films that is dedicated to exploring black British life in all its complexity, diversity, sadness, and joyis a step in the right direction.  Amongst the BFI’s top10 great black British Films are some of my all-time favourite films:Jemima + Johnny (1966), directed by the lateSouth African Lionel Ngakane – an ANC member who was exiled to London; Pressure (1975), director Horace Ové; Babylon (1980), director Franco Rosso; and Burning an Illusion (1981), director Menelik Shabazz. The spark to make films was lit when I programmed them all as part of the Black Film Festival, celebrating Black American Independent Films at the Commonwealth Institute and the National Film Theatre in February 1982. Watching these films, listening to the struggles of Black British and African American filmmakers fuelled my desire to do just that. From 1986 when I produced my first film, I have travelled across the world telling compelling untold stories.

Twenty years on, I am still surprised when I meet young black people and they tell me they have seen Babymother and loved it. I am happy the film has endured, and that people can still see something of themselves reflected in the story and the characters in this reggae musical set in NW10 London.

Today, our daughter, Anuradha Henriques is working for a production company on a feature film set in London.